When a Golf Community Breathes New Life Into a Town

When a Golf Community Breathes New Life Into a Town

Benton Harbor, Michigan, has been revitalized with the construction of Harbor Shores

It might be too much to say a golf course saved the city of Benton Harbor, Michigan. It’s just impossible to deny the development of Harbor Shores started a successful turnaround of a community in need of a break. The decline of American manufacturing hit Benton Harbor particularly hard in the 1980s. Less than two decades ago, the city in southwestern Michigan still saw great stretches of urban blight and industrial decay scarring stretches of the Paw Paw riverbank. Abandoned warehouses and vast piles of scrap metal and discarded tires smothered bluffs overlooking Lake Michigan.

Fortunately, one corporate giant stayed home in Benton Harbor, as WhirlPool continues to call the city its headquarters. The company looked at the wasteland left behind by more than 20 manufacturers and chose to provide the seed capital that turned desolation into Harbor Shores Golf Club. 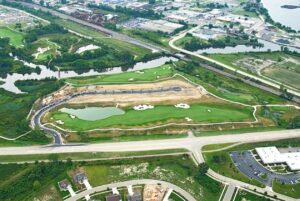 Harbor Shores sits on what was 3 million square feet of toxic property.

Celebrating its 10th anniversary this year, Harbor Shores sits on what was 3 million square feet of toxic property. More than 140,000 tons of debris gave way to immaculate fairways designed by the legendary Jack Nicklaus. The course proved to be a cornerstone on which the surrounding community transformed into a lakeside real estate haven.

“Whirlpool’s nonprofit division saw this land on the water that it wanted to transform,” Mr. Wright said. “It was the idea of the company’s former CEO David Whitwam to build a golf course. Former board chairman Jeff Fettig had a friend from his alma mater of Indiana University who knew Jack Nicklaus. The question was, would Jack come here and take a look?”

“The Golden Bear” did show up, and the course Mr. Nicklaus eventually designed both rescued and preserved the unique ecosystem of this Great Lakes waterside town. Harbor Shores runs along four terrain types, including an inland landscape, traditional woodlands, Michigan dunes and the Paw Paw River wetlands. In keeping with the 21st century philosophy of adapting the golf course to fit the terrain, the Nicklaus design team imported no outside plant species into the development.

Every hole includes a posted photograph of what the landscape looked like before the course existed. Harbor Stores and the Benton Harbor Arts District paid respects to the man who designed the 18-hole run by installing specially commissioned art pieces in each tee box. Created by Jerry Catania and Josh Andres, the glass and metal sculptures are named after the area’s native plants and flowers, while celebrating each of Mr. Nicklaus’ 18 major PGA Championships. According to Jeff Noel, vice president of communications and public affairs for WhirlPool, the company set out to build more than just a golf course. It wanted to spur multiple local improvement efforts across many fronts.

“WhirlPool wanted to be part of multiple initiatives to help Benton Harbor,” Mr. Noel says. “Not only is that in the best interests of the city, but it’s in our best interest also as it helps us attract and retain talent. We do better. Our neighbors do better.”

“When we were founded, it was always a goal to benefit our city. All of our leaders over the years maintained that passion because it’s the responsibility of any company to help create a better community.” As a result, Mr. Noel can report WhirlPool’s support of several initiatives, including the construction of 300 new public housing units and 122 Habitat for Humanity homes. As the golf course gained fame and hosted the likes of the KitchenAid Senior PGA Championship, the restored stretch of natural beauty became a place companies wanted to do business and people wanted to live. “I’m always careful to paint Harbor Shores as the sole solution to the problems Benton Harbor was facing,” Mr. Wright explained. “There were societal aspects and economic aspects, but I believe the golf course became an enabler for the rest of the area’s development to settle in and grow.” 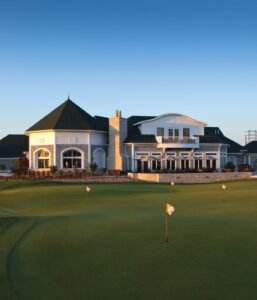 A statewide network of construction companies and real estate developers partnered with Harbor Shores, including Mosaic Properties, Falcon Homes and Powell Construction. The result is more than 100 residences built during the last 10 years in what’s become a high demand real estate destination. “Our original development here was the Hideaway Cottages neighborhood,” Mr. Wright said. “That’s 58 homes, and we have only one lot left in that neighborhood. The Fairways collection is an extension of that—adding 30 homes for a total of 88. There are only two spots left in that addition.”

Mr. Wright added that the Trailside Cottage neighborhood of 19 homes built in 2013 is now sold out—while the six-unit Enclave community is 50% complete. Those homes go up to $1.5 million.

For buyers looking to get into the area’s market, the latest creation of Harbor Village will include 78 homes, including 48 townhouses. These upcoming properties are expected to settle into that same maximum $1.5 million range. “Our entire development space here is 530 acres,” Mr. Wright added. “Half of that is the golf course, and we developed another 50 acres beyond that. We still have about 150 additional acres on which to build. I think that future growth will include three or four premium sites for mix-use construction, creating properties that will blend residential and commercial use.”

While the houses go up, hotels move in and restaurants grow around the golf course, Mr. Wright agreed that it’s the impact Harbor Shores continues to have around the community that makes it important to Benton Harbor.

“To help this city, there are three legs to the stool—physical change, social change and economic change. Harbor Shores helped to make the physical change, and we’re working with WhirlPool and the community to aid in the social change—partnering with the Benton Harbor Boys and Girls Club and the Benton Harbor Public Schools. Now, Harbor Shores is working to attract economic change by attracting more businesses into the area.”